The Everyday Hero by Saloni Bhardwaj

“Every morning I wake up feeling inspired about the opportunities that lay ahead of me to serve more” Says Kushal Raj Chakravorty, Founder Lotus Petal Foundation. 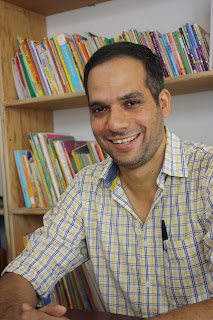 The innate desire to serve others became so strong that at the age of 38 Kushal started the Lotus Petal Foundation, an organization that provides free food, education and healthcare to the children living in the urban slums of Gurgaon. A regular IIM graduate, working full time for IKEA, a stable career with excessive international business travel, a simple family man with two daughters and a dog, really isn`t enough to some up Kushal. In the mundane he imagined the extra ordinary. In the cracks of living life in India, he saw opportunity to serve.
After forming the Lotus Petal Foundation in 2011, Kushal started doing small, organized acts of charity.

He used his skills and business acumen to make the life of boys in Mother Teresa`s Deepashram more comfortable. Deepashram is mother`s home for the destitute. It houses orphaned and abandoned boys who have cerebral palsy or are from various special needs background. Kushal, introduced technology and new age systems to the home to make daily operations more efficient and life for the boys comfortable. He still considers the boys at Deepashram his friends and runs an art therapy program for them twice a week.

As his path progressed, Kushal considered serving the people living in the slums around his home his personal responsibility. He wanted to provide the children on the streets similar opportunity of education and better life like he did to his own daughters. It became increasingly difficult for him to realize that there were quite a few children around him going to sleep without having eaten a single morsel during the day.

Kushal modestly sums up the first few years of Lotus Petal as ‘random acts of charity’ but in the scheme of things there was very little left to chance. Every step taken was thought out, each project was meticulously executed, events were documented and what did not work, was reflected upon and redone. In his pursuit to reach out to many for doing good, he also unknowingly laid a strong foundation for a transparent organization where each system was meticulously put in place after a lot of thinking.

Soon Kushal had developed a strong rapport with neighboring NGO`s and was running some kind of programs with most to benefit the underprivileged. In his interaction with the organizations running primary schools he identified a gap that he felt was the cause that most children were unable to break the poverty ceiling. Free education in most schools is until grade 5. He often times wondered what happened to the students after that? For the fear of loitering on streets or doing their parents job, most children stayed in grade 5 for a few more years until they eventually dropped out to earn a living at a very tender age. Once this golden period of education was lost, the child would always be a menial worker and be stuck in the cycle of poverty and hardship.

This need gave birth to the Pratishthan Learning Center. This program helped students to complete their grade 10 and enter a vocational course depending upon their aptitude. While working with the teenagers he realized the degree of unrealized abuse that was meted out to these teenagers in their younger years. He wished if Lotus Petal could take care of children from the start. Two years later, Lotus Petal started the junior section called Vidyananda School. A Kindergarten to grade 5 primary school for children living in the slums.

All education, stationery and uniforms provided in the school are free. Besides education, Lotus Petal Foundation provides children with fresh breakfast and lunch every day. An in house doctor takes care of all their primary healthcare needs and various community doctors facilitate secondary healthcare as well. The organization is a surrogate family to the students.

Kushal was born and raised in a simple Bengali home in Ranchi, Jharkhand. His humble roots, modest family lifestyle and a shoe string budget of a single salaried household left an indelible impact on his youth. The lessons learnt while growing up of managing in little and being grateful for the abundance are carefully incorporated in Lotus Petal Foundation. He ensures that the requirements within the school are kept low and constant and should be met strictly with donations. His team is very fastidious about cost cutting and managing the systems that are laid down by him. Accountability, transparency and integrity are the cornerstones of Lotus Petal Foundation.

“Service helps me to do everything better, whether it’s my job or family responsibilities or just managing my personal time. It has completely transformed my life towards the better. I am more aware that I have to make every minute count. I need to keep my focus on the most important things in my life for which I have to prioritize judicially” says Kushal on being repeatedly asked about how he manages his life and keeps a sane balance. He`s a man of few words, vegetarian & a tea totaller, Kushal leads a disciplined and regimented life.


To most of us he`s unique, to him it comes naturally. He`s not the only one but for sure he`s a special one. Some call him a torch bearer others address him as the beacon of light- but to the ones who know him or have met him, he`s really the nicest guy who was born to do what he`s doing- and that too very well.